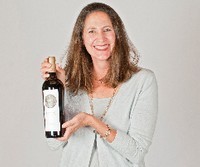 Recently, we had the incredible opportunity to speak to Sharon Kazan Harris of RARECAT wines.  Sharon is a huge supporter of entrepreneurship as the path to success for women everywhere. What follows is a summary of our conversation, which is both inspiring and holds several lessons, but most importantly to follow your passion and be relentless in your pursuit.

The mention of Bordeaux, France, conjures up ideas of romance and affluence. The flavor of this exquisite region is available in the United States, through the ambitions of Sharon Kazan Harris, owner and director of winemaking for RARECAT Wines, a boutique winery in Napa Valley, California. RARECAT Wines fuse the tradition of Napa with the sophistication of Bordeaux techniques and palates.

Harris first visited Bordeaux more than 30 years ago as a young woman, then began her path to corporate success – rising through the ranks in publishing, advertising and technology. However, Bordeaux was always on her mind, and she eventually purchased a vineyard. After some time, Harris recognized that she needed to learn more about the actual science of wine making. She applied for and was accepted by the prestigious D.U.A.D program at the University of Bordeaux. Along with her family, Harris moved to France to study and complete the intensive, one-year program.

Almost immediately after returning to the United States in 2005, Harris founded RARECAT Wines. While Sharon’s time in Bordeaux was marked with inspiration and supportive friendships, she acknowledges that it was a challenging aspect of her journey. The unfamiliarity of a country, cultural barriers and the learning curve that came with immersing herself in an intensive, world-renowned program did not come with ease. However, Sharon’s love and passion for wine, combined with her relentless persistence propelled her forward.

Harris began to contemplate not only “what type of wine” to create, but also how to harness “the power of connection” that only wine can provide. For years, Harris observed women handing over the wine list to men at business dinners and networking events, and saw a perfect opportunity to change the dynamic. Leveraging her observations and experiences in the corporate realm, Harris set out to serve women everywhere by taking a leadership role by empowering women via wine education as well as publically supporting and promoting female vintners. Today, RARECAT Wines is more than ‘just’ a winery. Harris works with corporations in the Bay Area to make wine gender-neutral. Further, she has established the RARECAT Society, a networking society using the power of wine to make meaningful connections.

Harris believes that the opportunities to empower female entrepreneurs and leaders are endless. Women are highly informed consumers and should be equal creators in the economy. Through RARECAT Wines, the RARECAT Society and A Women’s Palate (wine for women by women), Harris has found creative ways to support women everywhere. She is also extremely encouraged by the growing support of men, particularly those who have daughters.

An important lesson Harris shares for entrepreneurs – young and old – is that no one should be defined by a single title throughout her entire career. The majority of people will have multiple careers throughout their lives. Given today’s technology and speed of change, a multi-faceted career is not only possible, but is necessary for career survival and progression. Gone are the days of a linear model for business success. Sharon Kazan Harris proves that your spark can come from anywhere and that it is very possible to serve a greater purpose, run a successful business and follow your passion.

READERS: Tell us your story. What sparked your business idea? Have you managed to achieve success while following your passion? We would love to hear from you and possibly feature your story in the future.

Begin typing your search above and press return to search. Press Esc to cancel.